The world’s oldest profession is subject to completely different laws in different parts of the world, and the situation in Europe is particularly complicated. There are essentially four different ways in which European legislators approach prostitution:

The most favorable approach, which could be called the German model (because it has been commonly applied in German lands since the Middle Ages), is to treat prostitution as any other profession and to apply appropriate regulation (citizens can be officially employed or self-employed as prostitutes).

In this model, brothels are run as ordinary businesses (but may be required to obtain a special license beforehand). Countries that follow this model are shown in green on the map below. Note that Hungary and Latvia follow a similar model, but brothels are illegal. Surprisingly, Turkey and Greece follow the German model, but with strict regulations. As a result, the vast majority of prostitutes in these countries work illegally.

The laissez-faire model (shown in blue) neither recognizes nor prohibits prostitution. Prostitutes operate outside the legal context and generally do not pay taxes. Brothels, pimping, and other forms of exploitation of others are prohibited (since there is no way to legally employ a prostitute), but brothels are generally tolerated and operate officially as massage parlors or hourly hotels.

The Swedish model (more recently also called the Nordic model) prohibits paying for sex but has laissez-faire policies regarding the prostitutes themselves. In other words, if a person has sex with another person in exchange for money, the paying party commits a crime, while the receiving party does not.

This model was first adopted in Sweden in 1999, but has since spread to other European countries, including France in 2016. Countries that follow this model are shown in purple on the map below, and the amount (or jail time) shown is the maximum penalty for the buyer under the law.

Finally, the prohibitionist model makes the act of prostitution (selling sex for money) illegal, which means that the prostitute, not the client, is committing a crime. Countries that follow this model are indicated in red, and the amount of money (or jail time) indicated is the maximum penalty for the prostitute.

The “Swedish model,” which prohibits people from paying for sex but tolerates sex workers, was introduced in Sweden in 1999. It was only adopted in France in 2016. 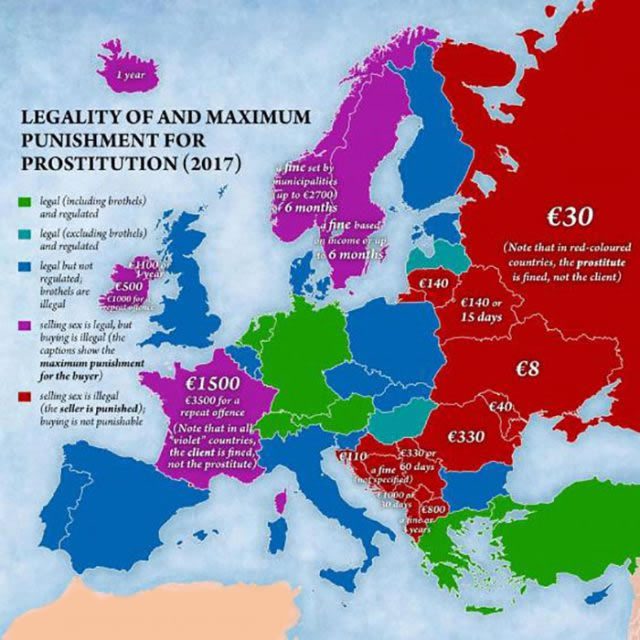